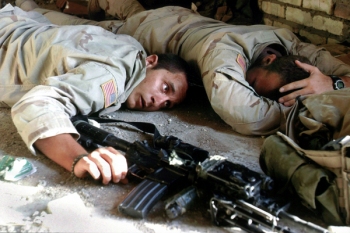 The recent killings of Canadian soldiers, Warrant Officer Patrice Vincent and Cpl. Nathan Crillo, in separate incidents over the past month has give rise to anti-Muslim sentiment and attacks. In an effort to denounce any association or shared belief with the killers, Canadian Muslims sporting poppies gathered on the steps of the Manitoba Legislative Building on Sunday, to show their support for the soldiers.
The rally was led by the President of Winnipeg’s Ahmadiyya Muslim Jama’at Mosque, Dr. Munier Ahmed. “”We want to show that we are part of this community and we categorically condemn these attacks as terrorism. The terrorists want to divide us, but we want to stay united. We want to show everybody that Muslims are peaceful, Islam means peace and we do not endorse these acts of terrorism in any form.”
“What they have done is terrorism, political assassination. Prophet Muhammad has this great saying ‘Be loyal to the country in which you live.’ So, theologically, we believe if you can’t be loyal to the country in which you live, you can’t remain there. You have no right to call yourself a Muslim,” said Bashir Khan at the rally. 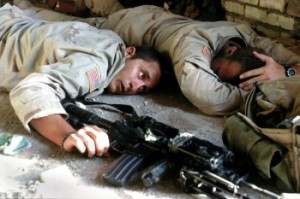 Khan, who is also a member of Ahmadiyya Muslim Jama’at, also emphasized his opinion that many of the problems that the Muslim world faced today were as a result of not finding a balance between tradition and modernity.
Other Muslims at the rally said they stood shoulder to shoulder with fellow Canadians in condemning radicalization and terrorist acts. They paid tribute to members of the armed forces who are dedicated to protecting the country and the freedoms enjoyed by all Canadians.
Days after the killing of Cpl. Crillo by radicalized Canadian Michael Zehaf-Bibeau, members of the Cold Lake Mosque in Alberta woke up to find the building vandalized. The damage included broken windows and spray painted racist messages on the walls.
Muslim leaders from various parts of the country have condemned the killings and called on political leaders to denounce anti Muslim hate crimes.
Calgary Imam Syed Soharwardy also called on mosque leaders to be watchful of any converts showing signs of radicalization, “I’m not saying don’t convert them, but we have to be aware of those activities and work with police intelligence to make sure that a criminal person who just converted to Islam does not commit a major crime.”
Sunday’s rally was timed to coincide with the upcoming Remembrance Day celebrations so as to honor not just the two soldiers that died this past month, but also all others in history that have died fighting to protect the freedom’s of the people. It also comes ahead of Ashura, a holy day that commemorates the New Year in Islam, or Muharram.